I’m all about being outside, especially now that the weather is warmer. On Saturday I taught an outdoor boot camp class and there wasn’t a cloud in the sky. Even though it felt chilly to start we warmed up within minutes.

It always feels nice to get a great workout finished early in the morning!

We had new neighbors moving in Saturday so we spent most of the afternoon hanging around the house and helping them move a washer/dryer in.

Our dinner came on the early side because we didn’t really eat much in the afternoon. I grilled up some Pesto Chicken, zucchini, and we had some sweet potatoes with it.  Pesto is my best friend in the summer time and I’m pretty sure you will be seeing a lot more of it, so get used to it!

Once Ava fell asleep for the night (7pm woohoo) Marc and I sat on the Porch and sipped on a glass of Cabernet, it was quite delicious and nice to relax such a beautiful night!

We also snacked on some popcorn and finished our night with the season finale of Grey’s Anatomy which was GREAT! I’m slightly obsessed with that show, if I haven’t told you that before. 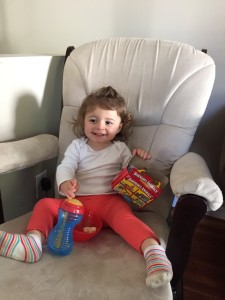 Sunday started off a little slow in our house. Ava got to watch some TV for a while because I woke up with a migraine. I get them from time to time and this one was pretty brutal. I initially started thinking that my day was ruined and I really didn’t want to be stuck inside on such a sunny day.

I decided to take some medicine and within an hour I felt like a million bucks. I’m always hesitant to take medicine but I’m super thankful I did! I felt like a normal human being again!

Around 9am we took Cooper and Ava for a walk on Greenwich Avenue and then let them both run around on the field. It’s so fun to watch Ava chase Cooper and let her explore the park on her own.

We dropped Cooper off after the walk and headed to the beach, we didn’t want to waste any time! Ava loves playing in the sand and she actually sat on the beach towel for a solid 20 minutes straight. It was nice to just relax and watch her pile sand on my legs.

There weren’t that many people on the beach so that was pretty awesome too. Ava started getting fussy and threw a small tantrum so we new it was time to get her lunch and a NAP!

Ava took a fairly long nap in the afternoon, and while she slept Marc headed to a friend’s Birthday BBQ.  Around 3pm we all went over to my parents for a BBQ. I love BBQ food and I think it’s because the foods are so simple and extra tasty when they are grilled. We had hamburgers, corn on the cob, salad, and potatoes! 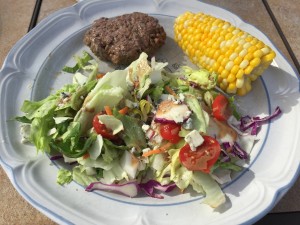 We all had fun being outside for the majority of the day and seeing Cooper & Ava smile!

My dad bought Ava a big pool, so she had fun playing in it while he set sit up. She clearly couldn’t wait for him to put water in! 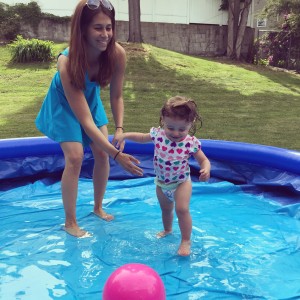 Now I am heading to the YMCA to teach an early Memorial Day Group Power class before we attend our last BBQ of the weekend at the beach!

It’s easy to forget what Memorial Day is all about so lets take the time to remember those people who died while serving in the country’s armed forces.

What fun things did you do this weekend?

What is your favorite BBQ food?