On Monday both Ava and I were home sick with a nasty head cold. I started feeling something coming on Friday night after I got a hair cut and then Saturday the cold was in full force. My weekend wasn’t exciting and that’s why I never posted about it.

I won’t complain about being sick because we have all been there but I will say that being pregnant and being sick is tough. You can’t take medicine and you have to force yourself to eat/drink even more because you have a baby to take care of and you cannot afford to get dehydrated!!!

I’m linking up with the WIAW crew over on Arman’s blog today to share my food journal with you from Monday. I was home all day and I actually remembered to snap pictures of most of my food!

I normally have to set an alarm on Mondays to make sure I am up early enough before my class to eat and get ready, but this Monday was different. I found subs the day before for both of my classes because i knew I wasn’t going to have any energy to even get up off the couch let alone workout, yell and teach others.

I woke up around 650/7am which wasn’t that late but a little later for me and came downstairs feeling extremely groggy, tired, and not wanting to do anything. Since I have a growing baby I need to take care of I forced myself to make my usual morning meal of scrambled eggs with veggies & potatoes and a piece of bacon. I also had a few sips of coffee and TONS of water. 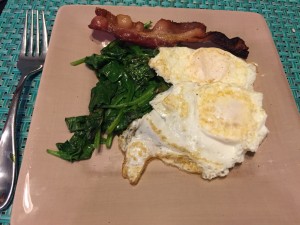 Ava had 2 pieces of bacon for breakfast and Milk, sounds pretty amazing right??

After breakfast I sat my butt on the couch for a while before I decided to to change into somewhat decent lounge attire and put Ava in some decent comfy clothes too. It took every once of energy to do that and I’m not exaggerating when I say it probably took me 45 minutes to do both of those things.

Around 10am I ran to the library to drop of some Kids CD’s that were due that day and made a quick trip to the grocery store for milk and fruit. Ava needed more milk and I wanted more fruit. Well actually we both wanted fruit!

In the car I ate a banana.

Once I got home I made a piece of toast with egg whites. I needed a little something else to sit in my belly for a while. 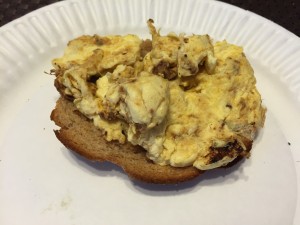 It was SOOO nice out and by so nice I mean it was 46 degrees out at 11am (which felt like 70 degrees) so I felt the need to stroll down the street with Cooper and Ava. It was a good idea for fresh air but a bad idea for me because I felt worse when we got back. I literally walked at a turtles pace but for some reason it drained me. WOW.

Back to the couch, this time Ava watched some TV, take a guess.. Mickey mouse per her request. The poor girl was just as sick as me but she didn’t complain she just laid around and rested which is exactly what her body needed.

We had two big bowls of Chicken Soup for lunch topped with parmesan cheese. I made a big batch of soup on Saturday when I wasn’t feeling well. I always crave soup when I’m sick!

We also some chips & guacamole. 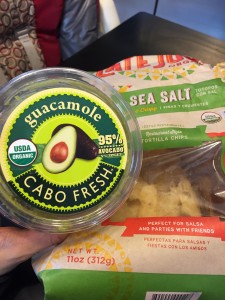 This was a random combination but it was easy to grab and eat without thinking!!! Ava licked the guacamole off every chip I gave her and then ate the chips after, weirdo!

Ava took a nap from 12:30-3pm. You think I would be able to nap myself but I couldn’t breathe or get comfortable so I laid on the couch and did some computer work. My mind wouldn’t relax so I just figured laying down was still a good option right??

Once Ava woke up from her nap I realized I was hungry again and made a Chocolate Shakeology. It was so good and so soothing on my throat.

I listed off about a million snack options for Ava and she decided on peppers & cucumbers so the two of us snacked on some healthy veggies. I’m gonna give her credit on this one, she forced me to eat my veggies!!!! 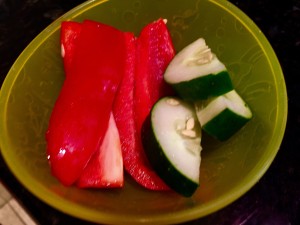 At almost 5pm on the dot Baby G was hungry and I made the quickest most simple meal I could in about 20 minutes well minus the potatoes that baked in the oven for an hour we ate Roasted Chicken with Pesto, Roasted Green beans with olive oil and a baked potato. Simple and filling!! I actually didn’t eat all of my potato and had more pesto chicken instead. 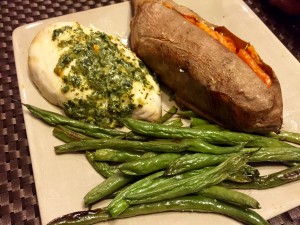 I’m sure you know that I’m loving yogurt parfaits lately so that was my night time snack choice. Siggi’s Vanilla yogurt with strawberries, grapes & granola!! It was delicious and a great ending to my night. 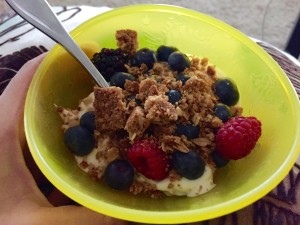 It wasn’t a bad day of food considering I didn’t feel well, but I had to force myself to eat and make smart choices because I’m not just taking care of myself I have a little baby that needs to stay healthy too!!

What was one of your favorite meals from the week?

Do you find it hard to eat when you are sick?