Where do I begin… I guess this will be PART 1 of 2 post.. since in my mind there was a lot that happened in my birth story.

It was faster then I could have ever imagine, but lets break it down…. I hope you have a cup of coffee this could take a little while!

I am going to take it back to the morning on the day my water broke December 4th. My morning started out as usual and I headed to the YMCA bright and early to train some clients. I woke up feeling a little different, I was crampy and had a little bit of pressure in my lower abdominals. As much as I wanted to lay down curled up, I knew work would make me feel better. My personal training sessions flew by and when I was finished I decided to walk on the treadmill since it was freezing outside! After 30 minutes of walking I had enough. My afternoon was a little less busy and I had some time before my group power class to run some errands and eat some dinner. I had no desire or urge to make a nice dinner and asked Marc if it was okay if we had tuna fish sandwiches, luckily he said yes. I quickly ate a sandwich and headed back to the Y to teach Group Power. The class went great, and at the end I told the group that it would be the last class I planned on teaching. At 38 weeks pregnant It was getting too difficult to do the full workout with the cramping and pressure and best to rest a bit more. Everyone wished me luck and said they would miss me.. it was sad, but I am happy and proud to say I taught classes right up until the last possible second (even though I didn’t know this beforehand).

After class, I headed home with a ravenous appetite. I immediately ate tons of food.  I guess I was carb-loading for the main event. At around 9:30pm I felt nauseous so I decided to lay in bed…. still awake and feeling more nauseous I decided to try eating a snack around 10:30pm. Normally that helps my nausea but it made things worse! I got up and went to use the bathroom one last time before going to bed for the night.  I got 2 steps out of the bathroom on my way back to the bedroom and then my water broke!! I ran back to the bathroom and immediately yelled to Marc, “MY WATER BROKE!”

I started shaking with excitement and nervousness…. the big moment came and I knew in the next 24 hours I would finally be able to meet my little girl. I had been saying through my whole pregnancy that I wanted my water to break so.. my wish came true. I called my mom to tell her the news and then I called the doctor at a little after 11pm to let them know I was heading to the hospital. I had tested positive for a Group B test during my pregnancy which meant as soon as my water broke I needed to start antibiotics so that the baby didn’t get an infection during delivery. We rushed to the hospital after getting all of our stuff together, and arrived at about 11:30pm. I started to get really crampy and uncomfortable but it wasn’t too long before we were in the room and the nurses started taking all my vitals. Soon after I was hooked up to an IV and given Antibiotics.

I couldn’t believe the day was finally here. As I was laying in the bed, I kept asking Marc how close my contractions were.  He was following the contraction monitor closely and it was showing that the contractions were 5-7 minutes and at the time what I would consider moderate in strength. By 12:30 am, only 1 hr after arriving, the pace had quickened to roughly ever 2-3 minutes. The contractions were still only moderate in strength and I was able to fight through the pace of the contractions.  I decided to try to focus my attention on something that makes me happy and that was laying on the beach… in Florida. Then I started thinking about my next vacation and decided this was a perfect time to plan and distract myself. I literally asked Marc and my mom to look me up some flights. The thought of the beach temporarily worked but soon I needed something else. It wasn’t too though before they were getting stronger and stronger and at the faster pace. Now the  beginning seemed like a piece of cake… an hour later and how things had changed. And let me tell you;  it’s EASIER SAID THEN DONE!!! The nurse started talking to me about breathing, staying relaxed, and not tensing up. She also encouraged me to remind myself the pain I was in was just getting me closer to holding the baby in my arms. My contractions were  now about 1-2 minutes apart and the strongest they had been yet.  Then, out of what seemed like nowhere,  I started getting back labor and I couldn’t tell which was worse, the regular abdominal contractions or the back labor!!! They were so different, but both so painful, and it was getting harder and harder to stay comfortable.

At this point the nurse came back in to check me and said I was 3-4cm dilated and 80% effaced. She said I was getting close and if possibly to try and hold off on the epidural another hour so I could get my full dose of antibiotics. Her hope was that if I reached 4cm things would start to progress a little quicker.

At 1:45am, the anesthesiologist started administering the epidural. It seemed like it took a while to get it all hooked up but once she was done she informed me the pain should lessen in about 15 minutes.  Once the epidural was working, I felt a huge relief. I still was able to feel my contractions but they were mild and nowhere near as potent as before. It was roughly 2 am and for the first time since my water broke 3 hrs earlier, I felt like I was able to take a deep breath and relax. I still had no idea of how much longer it would be until I finally got to hold my baby girl and see the little feet that had been kicking me in the ribs for the last 8+ months…little did I know Ava was eager and ready to join us as much as we wanted to see her! 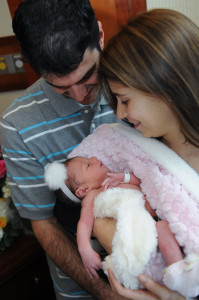 To be continued….. be sure to check the PART 2 post tomorrow! 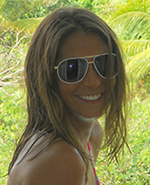