I hope you are all doing well after a crazy storm weekend.

Friday I had a fairly busy day and also had to get a mole removed off of my hamstring which needed a couple of stitches. The mole was small but right in the middle of my leg so I tried to be  cautious with my activity for the remainder of the day. I didn’t get to exercise which was fine, my body needed a rest day and that was the perfect day to do it! I ended up doing a Cardio Workout Saturday morning and my body was rested and ready to go.

In anticipation of the winter storm Marc and I decided to stay in Friday night and do laundry, housework, you know the not so fun stuff. Clothes are becoming an issue for me with my growing belly so I only have a select number of workout pants and lounge pants I’m comfortable in so I needed clean laundry especially if we were to lose power.

Saturday morning I woke up rather early. My plans were to sleep until 7am but Cooper barked at 5:00am and then I couldn’t go back to sleep.

(This is just the start of the storm at 6am, Cooper was still loving that there was 2 inches of snow)

Part of me was awake, excited for the snow, and then my belly started rumbling. That’s a perk to being pregnant, NOT. I tried to go back to bed and lay down a little longer but when I saw 6:30 on the clock I realized I shouldn’t push my stomach any longer.

I got up drank some water and had a 1/2 caffeinated coffee to get going. I wanted to enjoy this Saturday with my family as much as possible so I needed the boost I ate my breakfast and headed outside to see what this storm was bringing.

The day involved a lot of shoveling (Marc refused to let me do anything after my morning shovel with the light snow!)

Cooper LOVES the snow so he wanted to go outside ALL day long. I actually didn’t mind letting him out it was fun watching him roll around, shove his face in the snow and gallop through the yard. 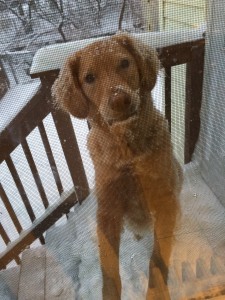 When I was little the first big snow fall of the season brought me so much joy, you can even ask my parents. I would bundle up no matter how cold, windy and snowy it was to run outside make snow angels, build snowmen, throw snowballs at my brothers, and just hang out until my toes and hands became numb. Then of course it was hot chocolate time

I still love the snow but it lost that “special feeling “ up until this year when I got to see Ava’s face when she looked out the window to see the snow coming down and the ground covered in white.

Last year she was too little to know what was going on so to see her face light up when she looked outside made my day. She did NOT want to put snow boots or a snow suit on. She cried and cried. So finally we gave up and let her “enjoy the view instead.” It was rather windy out so it probably wasn’t a bad idea to stay inside anyways. 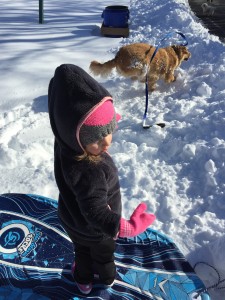 On Sunday we took Cooper & Ava to Bruce Park. Cooper had a blast running around and Ava was excited to be with him. 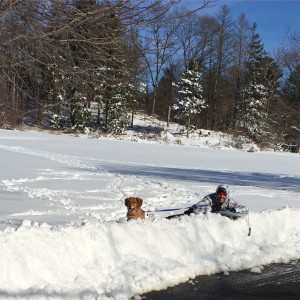 She didn’t exactly want to go sledding or play around in the snow but she enjoyed being outside.

I expected Ava to be just like her mom and want to roll around in the snow and play outside until she was too tired to move but that wasn’t the case. 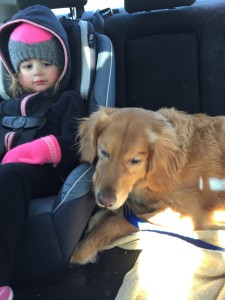 I know she was tired from lack of sleep so I’m sure that was part of the issue. I’m hoping this week we can get outside and really do all the fun things we had planned!!!

Sunday night Marc made a huge Chili and we ate while we watched the Patriots game.

We were not happy with the outcome, but I’ll stay positive and say there’s always next year.

did you get hit with a lot of snow from the blizzard this weekend?

Did you get to play outside and enjoy the crazy weather?